With “Westward,” Gabriela Montero pays homage to three pianist-composers who emigrated to the West in the early twentieth century in order to escape physical, cultural and psychological
oppression in their Russian homeland.

Born in the Ukraine, Sergei Prokofiev enjoyed a happy childhood in which his parents gave him every opportunity to develop his extraordinary musical gifts. He wrote his first piano 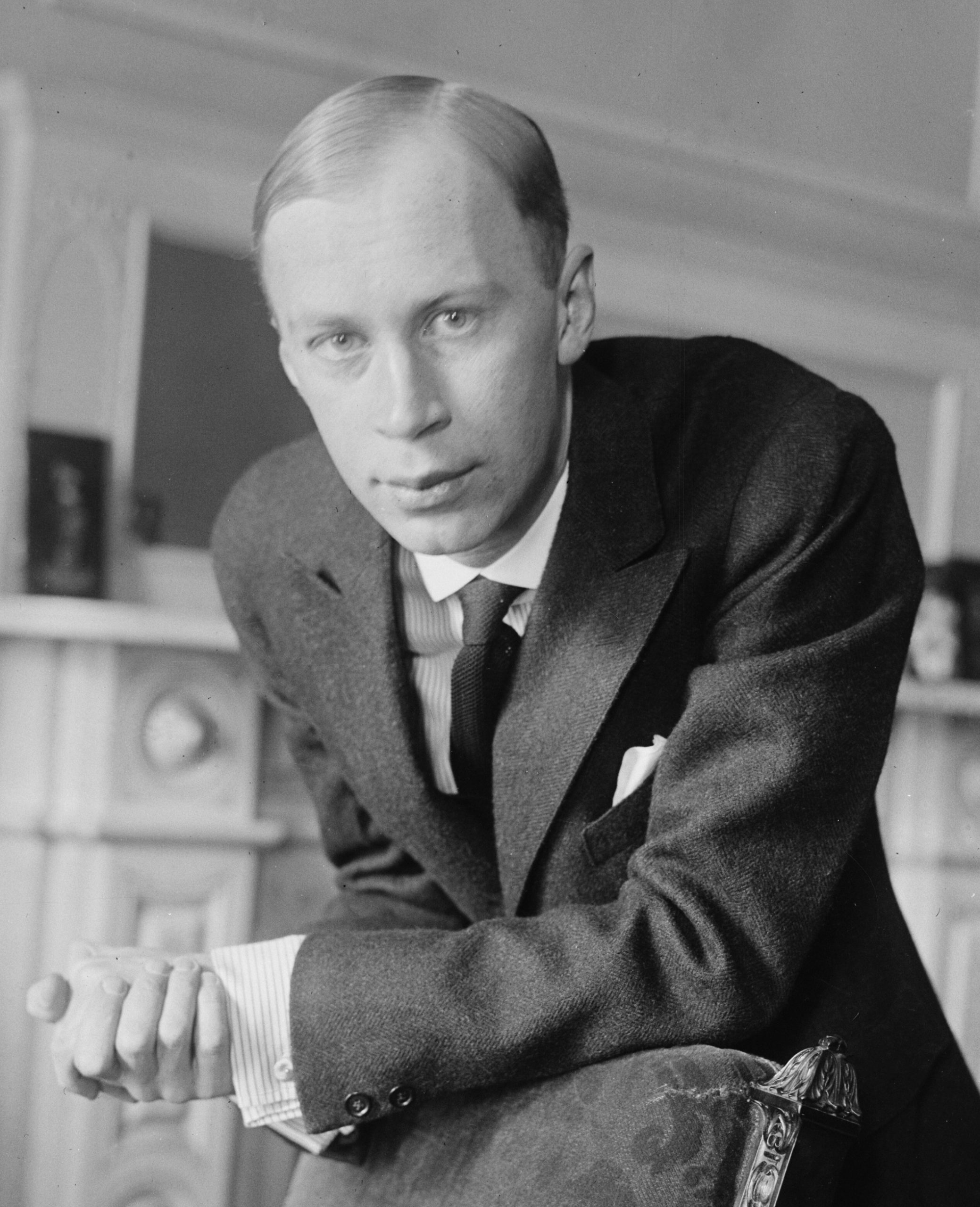 compositions by age six, a rudimentary opera at nine, and his first symphony at ten; he became a student at the St. Petersburg Conservatory at thirteen. During his study at the conservatory, Prokofiev gained respect for the music of Haydn and Mozart, for the elegant dance forms of the eighteenth century, and for the transparent sonority of the classical orchestra. In 1908 he joined Evenings of Modern Music, a group dedicated to the performance of new and controversial works. Here he developed a taste for new musical trends. After World War I, Prokofiev spent a good deal of his life in the

United States and then in Paris, gaining acclaim as a virtuoso pianist and a progressive composer. In 1918 he received official permission from the People’s Commissar for Education to leave Russia: “You are a revolutionary in music, we are revolutionaries in life. We ought to work together. But if you want to go to America I shall not stand in your way.” With the Great Depression in the 1930s, Prokofiev found it harder to live abroad and because he was homesick, he returned to the Soviet Union in 1936. Because of the many influences to which he had been exposed, however, his music frequently prompted severe criticism from the authorities.

“The cardinal virtue (or, if you like, vice) of my life has always been the search for originality. I hate imitation. I hate hackneyed methods. I do not want to wear anyone else’s mask. I want always to be myself.” Prokofiev described the elements of his style: “The first is Classical, originating in my early childhood when I heard my mother play Beethoven sonatas. It assumes a neoclassic aspect in my sonatas and concertos, or imitates the Classical style of the eighteenth century.” The second element is a search for the innovative.  “At first this consisted in the quest for an individual harmonic language, but later transformed into a medium for the expression of strong emotions.” Third is the element of the toccata, or motor element, which manifests itself as the perpetual motion types that are prevalent in twentieth-century music. The fourth element is lyrical. “Since my lyricism has for a long time been denied appreciation, it has grown but slowly. But at later stages I paid more and more attention to lyrical expression. I should like to limit myself to these four elements, and to regard the fifth, that of the satirical or grotesque which some critics try to foist on me, as merely a variation of the others.” These elements of Prokofiev’s style appear in conventional types of piano music, principally the character piece (a short musical composition with a single mood or impression) and sonata.

Prokofiev was one of most prolific composers of contemporary piano music; in fact, Stravinsky described Prokofiev as the greatest Russian composer of his day, after himself. Although Prokofiev’s early compositions were more Romantic in character, beginning with Op. 4 his piano writing became more dissonant and percussive in nature with an emphasis on the grotesque. Sarcasms, Op. 17, composed between 1912 and 1914 exemplifies this style. These five character pieces are at times ironic, bitonal, brusque and percussive. Prokofiev begins with Tempestuoso, a stormy opening created by a percussive, accented non-legato melody accompanied by marcato chords. The second more contemplative Allegro rubato sounds improvisational with plucked chords and arpeggio flourishes. The furious Allegro precipitato opens with an intense burst of energy, but a lyrical middle section has a calming effect. Smanioso (Frenzied) is characterized by nervous dotted, jerky rhythms. The final, Precipitosissimo, is loud with fast repeated chords and a contrasting melancholy middle section. Russian pianist Konstantin Igumnov commented on the final piece: “This is the image of a reveler. He has been up to mischief, has broken plates and dishes, and has been kicked downstairs; he lies there and finally begins to come to his senses; but he is still unable to tell his right foot from his left.” (Hyperion Records)

Prokofiev composed ten piano sonatas, which spanned his entire career. “This concentration on the piano sonata (during the early twentieth century) seems something peculiarly Russian, since it does not appear, generally, in the work of composers in other countries; indeed, there is no other composer of major standing who gave to the sonata anything like the prominence accorded it by Prokofiev… Prokofiev stands out, then, not only in his preoccupation with the genre, but also in his taking it as a large expressive form that he then submitted to his own individual idiom without, however, significantly altering either the forms or the intent of the genre.” (Kirby) Prokofiev composed most of his sonatas in the typical three- or four-movement design and used the standard forms associated with the Classical sonata—first-movement sonata form with thematic contrast and development, simple three-part form in the slow movements and rondos for the finales. His harmonic vocabulary and treatment of the piano, however, is new and characteristic of his piano writing.

Prokofiev composed Piano Sonata No. 2 in 1912 while still a student at the St. Petersburg Conservatory. He premiered the sonata in 1914 at one of the Evenings of Modern Music. Prominent critic Yuli Engel wrote of “the Sonata’s powerful play of musical ideas, the energy of the creative will; it has a kind of angularity, harshness and coldness, but at the same time a genuine freshness.” Prokofiev chose this work for his New York debut in 1918. “Though there was a predictable quantity of critical carping (the Second Sonata represented ‘a charge of mammoths across some vast immemorial Asiatic plateau,’ according to the reviewer for Musical America), the recital was generally greeted with approving astonishment: ‘His fingers are steel, his wrists steel, his biceps and triceps steel’ said a review in the New York Times.” (Rodda)

Prokofiev used a four-movement form for his Second Piano Sonata. The first movement is a lyrical Allegro, ma non troppo in sonata form with a contrasting second subject in the style of a valse triste. The second movement Scherzo is in a “grotesque” style with staccato double-note figuration punctuated by cross-hand motives; the contrasting middle section is characterized by a gentler theme with octaves highlighted in both hands. A more Romantic style predominates in the third movement Andante. Chromatic double-note figuration surrounds the quiet melody of the first section; a repeated-note motive in the center section provides contrast. The Vivace finale is tarantella-like in style; Prokofiev again used sonata form with an animated, leaping main theme and a second theme, which hints at the valse triste theme of the first movement, bringing structural unity to the sonata as a whole.

The parents of Sergei Rachmaninoff both came from noble Russian military families. After his father squandered their fortune, however, they had to sell the family estates and in 1882 moved to St. Petersburg. Here the young Rachmaninoff attended the St. Petersburg Conservatory for his general education as well as for studies in piano and harmony. Due to the emotional turmoil 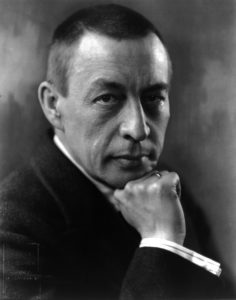 caused by the death of his sister and the separation of his parents, Rachmaninoff failed his end-of-term exams in general studies. Consequently, his mother sent him to the Moscow Conservatory under the strict tutelage of Nicolai Zverev. Here Rachmaninoff flourished; he also met many prominent musicians at Zverev’s Sunday afternoon gatherings.

After moving to the senior department of the conservatory in 1888, Rachmaninoff developed a passionate interest in composition. He graduated with honors in piano in 1891 and received the Great Gold Medal for composition in 1892. After graduation he met with great success as a composer, pianist, and conductor. At the time of the Bolshevik Revolution in 1917 Rachmaninoff left Russia with his family and never returned. Thereafter, he spent most of his time in New York City and   traveled and concertized throughout the United States. The nineteenth-century Romantic tradition of composers such as Chopin, Liszt, Schumann, and Brahms influenced Rachmaninoff’s highly individualized compositional style. The character piece (a short musical composition with a single mood or impression) dominated his output for piano; he also composed two sonatas for piano.

Originally composed in 1913, Rachmaninoff revised and tightened the structure of his Sonata No. 2 in 1931 by altering melodic lines, thinning the texture, excising entire sections, and easing the technical difficulties. He said, “I look at my early works and see how much there is that is superfluous, even in my sonata…” According to pianist John Browning, Rachmaninoff searched throughout his creative life for greater economy and simplicity of expression.

The opening Allegro agitato is a dramatic movement in sonata form with a sweeping main theme which combines chromatic figuration and a falling phrase. Rachmaninoff uses this theme in a variety of guises throughout the movement and ends quietly with one final repetition of the descending main motive. The slow second movement provides great emotional and technical contrast with its contemplative, dreamy, and more intimate mood. The Allegro molto, also in sonata form, is a fiery finale, which juxtaposes new melodic material with further variations of earlier themes, ending with a brilliant coda.

Russian-born composer, pianist, and conductor Igor Stravinsky is widely considered one of the most important and influential composers of the twentieth century. Despite his early 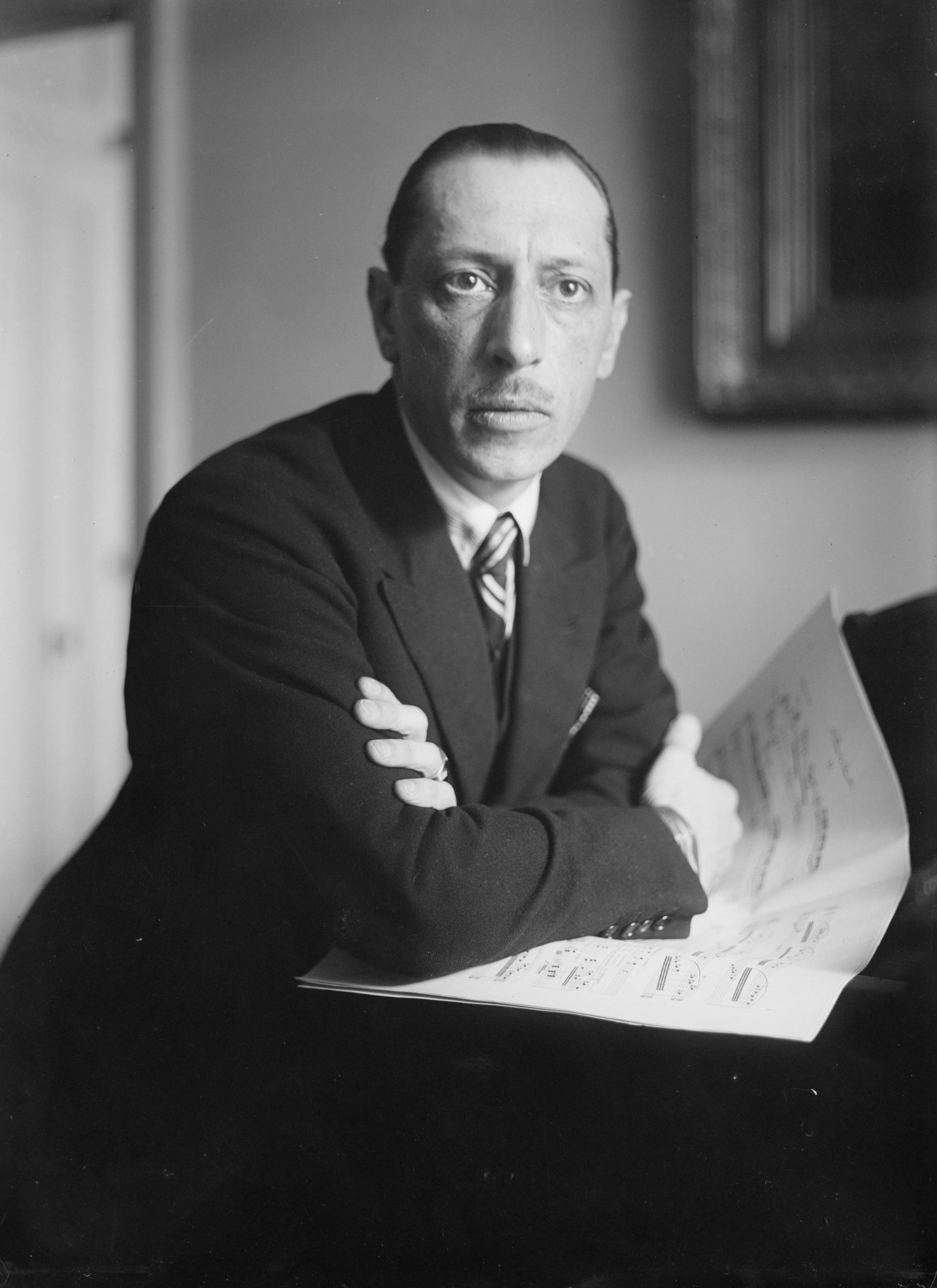 enthusiasm for music, Igor Stravinsky yielded to his parents’ wishes and studied law. At age twenty, however, he became a student of Rimsky-Korsakov and blossomed as a composer. In 1909 his orchestral works, Scherzo fantastique and Feu d’artifice came to the attention of ballet impresario Serge Diaghilev who commissioned Stravinsky to compose a ballet score, The Firebird. With the success of the premiere of Firebird in Paris in 1910, Stravinsky became an overnight sensation. Stravinsky and his family lived in Switzerland, France, and the United States from the beginning of World War I until 1962 when Premier Nikita Khrushchev invited him to the USSR for an official state visit. He died in New York City in 1971.

Stravinsky composed his Piano Sonata in F-sharp minor in 1924. The Sonata, along with other early compositions believed to be lost when he left Russia, was published posthumously in 1973. These early works had been kept at the Leningrad State Public Library during his exile.

Stravinsky said of this Neo-Classical sonata: “I have used the term sonata in its original sense, deriving from the word sonare (to sound)….” Neo-Classicism described the compositions of a group of early twentieth-century composers who returned to the ideals of classicism: order, balance, clarity, and emotional restraint. It was their reaction against the unrestrained emotionalism of late Romanticism. Stravinsky’s small sonata, really a sonatina, is in three movements (fast-slow-fast). The opening movement is a sonata form in flowing eighth notes with a brief development section. The second movement Adagietto, composed in a three-part form, is an arioso in a Baroque style with meandering flourishes. The driving last movement is a toccata-like rondo with continuously driving rhythmic motion.