We caught up with our Executive & Artistic Director, Aimée Petrin for a quick Q&A surrounding recent events of the Dirty Dancing cancellation and what’s involved in the process of rescheduling! 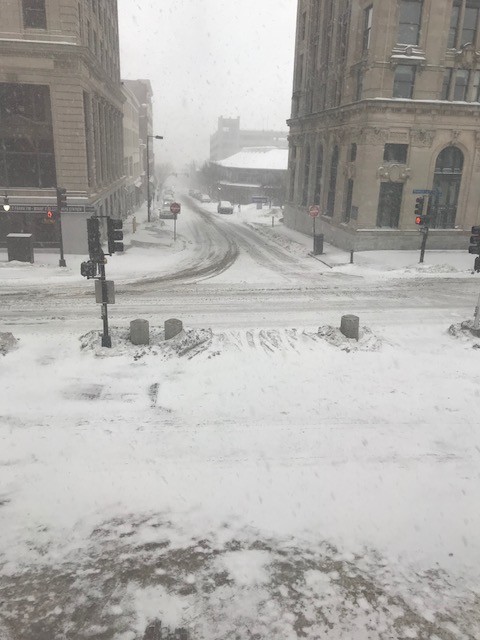 The beginning of the snow storm from 50 Monument Square on January 4 where Portland received over 10+ inches of snow!

Ovations: Recently Mother Nature hurled us all a doozie—knocking Dirty Dancing off the stage—at least temporarily in the process. We know that you are hard at work trying to secure the tour’s return. In the meantime, would you be willing to help the Dirty Dancing devotee, and your ticket holder in general, understand what exactly goes into making a decision to cancel or postpone a performance of that magnitude? Who ultimately makes the call? How many people are involved?

Aimée: Great questions! The final decision is made between myself and the show producers. Together we are interpreting the infamous “force majeure” clause, which states if the artists have arrived and are able to perform and lacking “a state of emergency declared by a civic authority” we are obligated to present or we are in breach of contract. (Perhaps this is where the familiar saying “the show must go on” originates?) In this case, the Dirty Dancing tour had arrived and was “ready and willing to perform.” For the two days leading up to the performance, we were in constant contact with the tour and the City. I repeatedly expressed our desire to cancel based on the weather reports, but we were held to our contract. To have cancelled without the tour’s acquiescence would have put us in breech, as mentioned. In the end, following a morning meeting, the City requested that we not proceed, the tour accepted this and we cancelled. We then began the task of trying to reschedule!

Ovations: Last season you were faced with a similar call with Once, but in that case the “Show must go on” was the end result. What factors were different? What do you remember as the turning point for making that decision?

Aimée: It really came down to the severity of the weather and knowing that the City would not be declaring a state of emergency. In fact, other events in the city, including a Red Claws game, were going on as planned. We also had had very positive experiences with worse storms and knew Mainers would come out. I’ve been here 12 years, and Dirty Dancing was the very first production that we’ve cancelled due to weather in that time. Here it was really the extreme combination of snow and severe wind AND the timing of the storm that drove the unusual decision.

Ovations: On social media many of the ticket holders seemed to be pleading for Ovations to cancel, while others insisted that Mainers can handle anything. How do you hold both of these viewpoints?

Aimée: This is really, really hard. We care about our patrons, their safety and want them to have a positive experience with us regardless of weather. I will admit, we take these comments personally. We are also a staff with families who have the same safety concerns. Many of us were here late on January 3rd and through the day on January 4th monitoring the situation and keeping in constant contact with the tour and City.

Ovations: There seems to be a perception by some that all presenters have “Performance Insurance,” so when a show is cancelled Ovations wouldn’t lose on the ticket income generated anyway? Is that the case?

Aimée: This is not true. Ovations does not carry event insurance. We have reviewed this several times and it simply does not make sense based on our presenting model. As a non-profit we are constantly reviewing the cost/benefits and risk management of this risky business. That said, given the recent situation with Dirty Dancing, I am reviewing this again with our insurance broker to make sure we are still correct in our existing position.

Ovations: Can you remember another time where you had to make a particularly difficult call about cancelling or postponing a performance that was out of our control? What about that moment was most memorable?

Aimée: During our 2008-09 season, we faced a similar situation with our presentation of Sweet Honey in the Rock, who we had programmed in celebration of Martin Luther King Jr. observances. We had a major snow storm come through that day. I happened to be home with a 103* fever, speaking with the agent who was also home (it was a Sunday) trying to get them to agree to reschedule. We had even cleared the next day in hopes they could simply stay in Maine a little longer. However, the next day was also the 2009 inauguration of President Obama, and Sweet Honey had a concert to perform as part of the festivities in DC. So, our show went on and included a free open rehearsal at which more than 100 hardy Mainers arrived on skis and snow shoes. It was quite a sight and added to the celebratory feel of the day. In the end, almost 1100 people still showed up (75% of the ticket buyers), even in spite of having the opportunity to exchange into a different performance later in the season. There was a real feeling of community in the hall that day as we all “weathered” the storm together.

About the Author: Sarah Prak