Upon meeting Toto Kisaku two years ago, I was immediately struck by his artistry, personal story and humanity. His compelling story, combined with expertly honed theater craft makes for powerful performance. 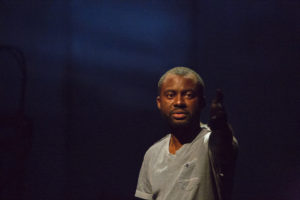 While we deeply regret we cannot all gather this week for “Requiem for An Electric Chair,” we’re pleased to announce we are rescheduling this for next spring; and in the meantime are working with Toto on a new edition of our podcast series, POV, which will be ready for you next month. So let’s take this moment to honor the artistry of Toto Kisaku while considering what stories his experience reveals and reflects in our own communities.

Toto is an award-winning playwright, actor, director and producer who studied drama at the National Institute of Arts in Kinshasa. After establishing the K-Mu Theater in 2003, he spent the next 15 years traveling the world to produce and participate in theater. He has appeared in major festivals around the globe. Toto is also a master teacher and community organizer.

Toto’s work — sometimes political and always in support of the more vulnerable — is powerful, heartfelt and thought-provoking. His plays give voice to those who otherwise would go unheard – an important reason why we gather around the world for live performance.

Back in his native Democratic Republic of Congo, Toto’s art also almost cost him his life. 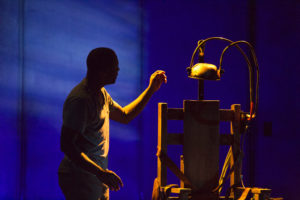 Since arriving in the U.S. in 2013, Toto has sought and been awarded asylum status. He now lives outside of New Haven, CT with his young son. Their story, like so many others’, expands our world views while also giving us a chance to share stories from our own communities. Stories from peoples who, like Toto, came with their families to the U.S. to escape hardship and persecution. Stories that bind us together in our desire for shared empathy and compassion.

Even when we cannot gather, our stories hold us together. Stay tuned for the release of our podcast featuring Toto and voices from our own communities.

Until we again can gather, be well,