Ovations is proud to be presenting Azam Ali and the Montreal-based music ensemble Niyaz tonight at PortCity.  At a reception last night for her, her husband Loga Tarkian and their son at Coffee by Design, I was once again reminded of and lifted up by the life-saving power of art.

No matter how small or how ill fitting or unsafe my family’s world seemed to me, I was able to move beyond it by plunging my nose into a book, writing a poem, listening to or playing music, picking up pen and ink and drawing.

I was one of the lucky ones.

While I was one of millions of babies in the post-WWII era born into traumatic circumstances and given up for adoption, I landed in a secure home: a white, round-faced, red-curled baby with plenty of meat on my bones in the U.S. during a time of great prosperity. And many privileges taken for granted.

Ali and Torkian were not so lucky. As children, they became, as Ali said during her remarks, “forced immigrants” thanks to the 1979 Iranian Revolution.

Few Americans understand the long-standing world tragedy represented by the western colonization of Iran for oil. Iran is the former Persia: a country of great geostrategic importance, yes, given its size and location and petro-resources — and more importantly home to some of the world’s oldest civilizations. Persians were once referred to as the “first Historical People” — because the empire they ruled from Persepolis was the largest the world has ever seen, connecting over 40% of its peoples.

“Pre-colonization there were so many ethnic and religious cultures and music [in Iran],” Ali said during her comments. “Most of which were lost to colonization. What is the Iranian identity?”

“Niyaz’s music — a part of Ovations’ “Seeking Resonance” series exploring artists and art inspired by or connected to spirituality — will take us to these many, many worlds outside of Portland.  The band has, in their own words, “created a 21st century global trance tradition by seamlessly blending medieval Sufi poetry and folk songs from their native Iran and its surrounding countries in the Persian Gulf, with rich acoustic instrumentation and state-of-the-art modern electronics.”

“Art became the homeland that we no longer had,” Ali said.

She believes it is art that can connect us in our increasingly global and secular societies. “To thrive in a secular society,” she said, “Art becomes the shining light. Art is where people go to church.” 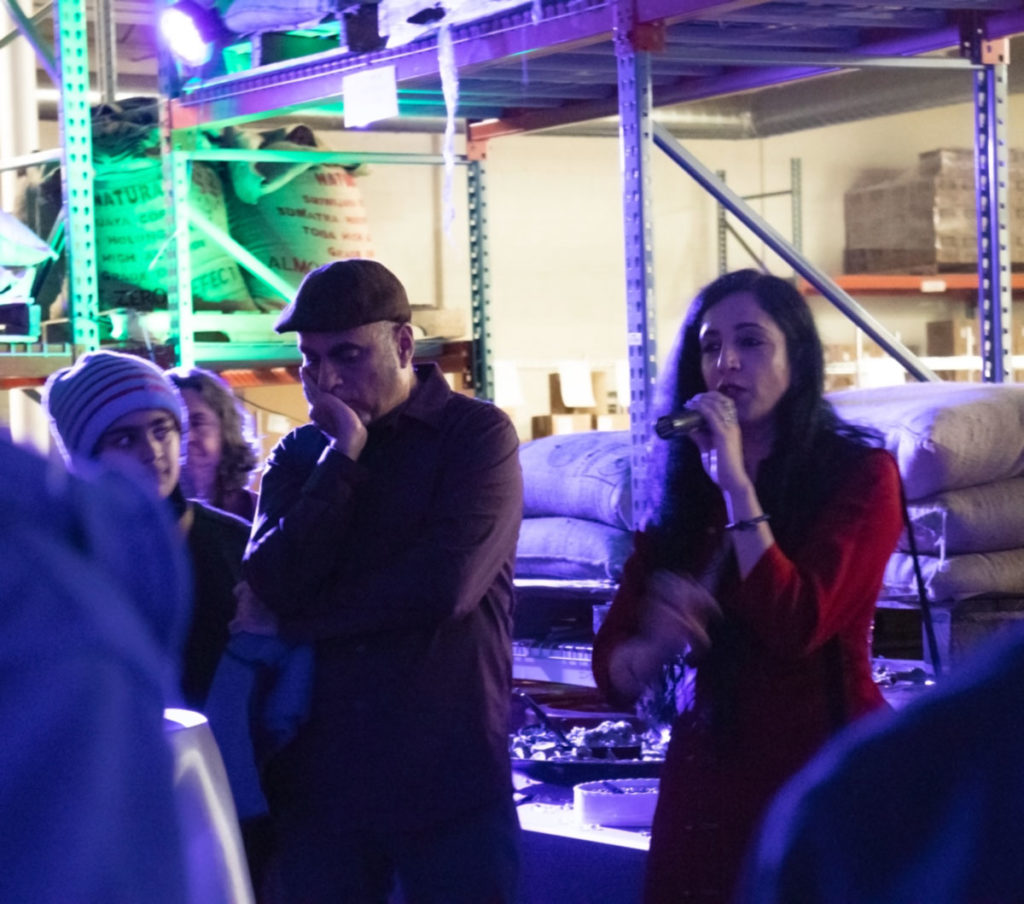 Ali and Torkian’s families, like so many world citizens, were forced to take a leap of faith and leave their homeland.

Mary Allen Lindemann, CBD’s vibrant founder and an Ovations’ board member, opened the evening by reading a poem written for her by a local poet: a woman who types her poems on an old-fashioned typewriter while sipping coffee at CBD.

“…we are all on our way somewhere./how can we know/how can we know where the wind,/i mean water, will carry us.” wrote Katherine Ferrier on February 14, 2019 in “Leap of Faith.”

How can we know. Where do we each find our resonance.

“…sometimes the practice is to leap/to leave what we know/and let the world open us/until we are river, and the sea/ that welcomes all wandering water/back home,” Ferrier concludes her poem.

Often we have to leave what we know to find ourselves welcomed anew.

As Azam concluded her remarks: “And on that note, I hope I can take you to church tomorrow.”