Home>Shows>Kristin Chenoweth: An Evening of Memories and Time Travel
Previous Next

Kristin Chenoweth: An Evening of Memories and Time Travel 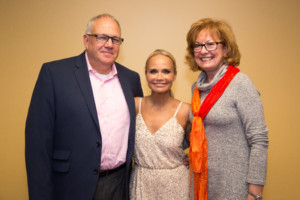 Music is many things to many people.

To me, it’s a catalyst for time travel.

The first few notes of nearly any song always have the power to transport me to the wrenching moments of various unrequited crushes, back to the heady days of scholastic triumphs, or forward to the promise of future plans.

For that reason, Portland Ovations’ recent presentation of Kristin Chenoweth was like stepping into a two-hour time capsule, piloted by the world’s most accommodating tour guide.

“…Restless as a willow in a windstorm”

There’s never been a point when music wasn’t front and center in my household.

Music in my parent’s house was an amalgam of Big Band swing, Broadway show tunes, pop and rock, and most prominently, the Great American Songbook. That mix has pretty much stayed with me throughout my life, so the repertoire of Kristin Chenoweth is a natural attraction.

Since last spring, when Ovations first announced that Kristin Chenoweth would open our 2016-2017 season, I’d been “as restless as a willow in a windstorm.”

Once she started singing, well, “Zing! Went the Strings of My Heart!” With her four-octave range, vocal agility, emotional depth, and engaging stage patter, Chenoweth and accompanist Mary Mitchell Campbell gave us all what we came for—an intimate exchange of music and memory.

A Trip Down Memory Lane with Kristin Chenoweth

“Smile, though your heart is aching, smile even though it’s breaking. When there are clouds in the sky, you’ll get by…” immediately sent me decades back in time, to my mother’s kitchen, with her trying to sing me out of my latest disappointment. (It could have been as minor as a horribly timed blemish or as major as an adolescent heartbreak. At 15, there was no end to the drama.)

“Moon River, wider than a mile, I’m crossing you in style someday…” put me in a high school chorus concert in the spring of 1973. “Bring him peace, bring him joy, he is young, he is only a boy,” sent me back to my honeymoon and a London theatre for my first time in the audience for Les Miserable. And the country ballad, “Your love is my saving grace,” let me imagine future years with my husband, “in your arms, where I know I’m safe.”

Given the enthusiastic response of the Merrill Auditorium crowd, I’m guessing everyone else was time traveling too.

Felicia Knight is President of the Portland Ovations Board of Directors

About the Author: Felicia Knight